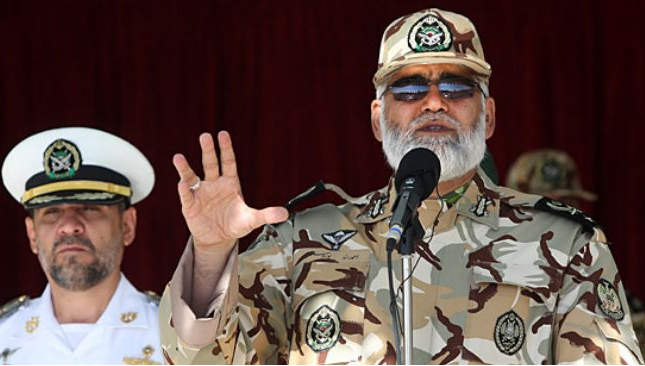 Breitbart has a clip of Iran’s Commander of Ground Forces Ahmad Reza Pourdastan who, on CNN today said the following (via translator):

“At the moment, we consider the United States to be a threat to us, because its policies and actions are threatening to us. We would like the US to change its rhetoric and tone of voice so that our nation could have more trust in US military leadership.”

Well, golly gee, General Pourdastan. I’m so sorry that our “rhetoric and tone of voice” is so off-putting to you.

Would you prefer it if we all mobbed Washington DC and started chanting “Death to Iran?”

And, not that it matters, but, you dress like a clown.

Listen, dickweed. We don’t want you to trust us.

We want you to fear us.

The only Americans who care if you trust us are the limp-wristed, pantywaists Barack Obama and John Kerry. And I got news for you, Clown Shirt. They do not speak for the United States of America.

You consider the United States a threat?

Glad to hear it.

It’s nice to know that despite all the stupid capitulation of Obama and Kerry, you still feel threatened.

Sweet merciful Zeus. Am I the only person who remembers IRAN IS OUR ENEMY?!!!

This is the problem with having an Appeaser-in-Chief. Our enemies seem to think we’re not supposed to be a threat anymore.

Obama has done so much damage to our foreign policy and to our military, it’s a wonder Iran IS still threatened by us, if you want to know the truth.

On the one hand, Obama and Kerry are bending over backwards to appease the mullahs in this moronic “deal,” while on the other hand Obama sends the USS Theodore Roosevelt to the coast of Yemen to prevent his “peace partner” from arming up the Houthis.

The guy is downright schizophrenic.

My guess is, General Pourdastan is only claiming that Iran sees us as a threat in order to guilt Obama into appeasing the mullahs even more while letting let Iran steamroll right over the United States and Israel.